What does David Bowie’s art collection say about him?

As David Bowie’s eclectic art collection goes to auction, we look at the difference between buying art as an investment and buying purely as an aesthetic response – and what that says about you

This November, the private collection of legendary musician David Bowie will go on sale at Sotheby’s. Amassing some 400 works, the sale includes some of the most important British artists of the 20th Century, including Frank Auerbach, Damien Hirst, Henry Moore and Graham Sutherland. Estimated to be the most valuable is Jean-Michel Basquiat’s five-and-a-half-foot tall painting, Air Power, which is currently valued at £2.5 million.

Bowie certainly knew his art, but his collection wasn’t all about the big bucks, it included works by artists that he felt an affinity to, and as such they were not always expensive purchases. ‘For [Bowie] it was all about the love of a piece,’ says Bryn Sayles, specialist and deputy director of Sotheby’s modern and post-war department.

‘He was a very intuitive collector. He collected some very big names but also some lesser-known pieces by people such as Percy Wyndham Lewis, Henry Lamb and Wilhelmina Barns-Graham. Those lesser-known artists were ones that he just really responded to.’

Quoted in 1998 in the New York Times, Bowie said: ‘[Art] has always been a stable nourishment. I use it. It can change the way I feel in the mornings. The same work can change me in different ways, depending on what I’m going through.’ 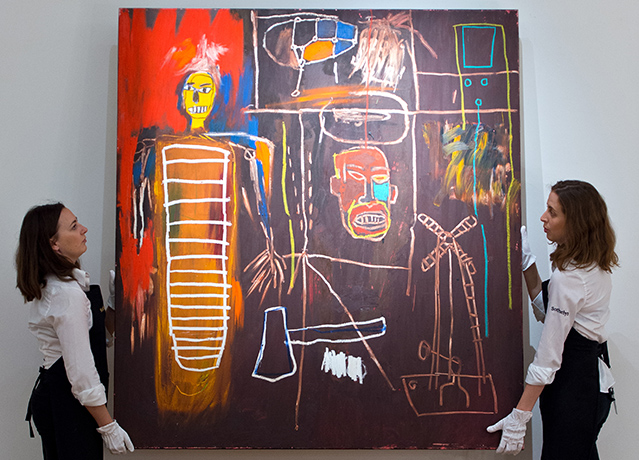 Being part of a scene

Seeking out significant paintings and sculpture in an artist’s oeuvre where he could, Bowie was an informed collector who made it his business to fully immerse himself not just in the challenge of acquiring works, but befriending artists and learning from them and their passions.

This is a practice that the authors of Collecting Art for Love, Money and More (published by Phaidon), Thea Westreich Wagner and her husband Ethan Wagner believe can offer people almost as much enjoyment as collecting itself.

‘Now there was a collector,’ says Thea of Bowie. ‘When you look at the length and breadth of the things that interested him and how he went about collecting, he was passionate and he wasn’t dedicated to just one expression. What was most interesting about him was how much British art he collected, which at the time would have had very little currency.’

The Wagners have been collecting and advising in the art world for over 35 years, and explain that normally collectors can be split into three categories. There are collectors who want to:

‘Thea and I both think that to collect for love is the most rewarding of experiences,’ says Ethan. ‘But that’s not to say that someone who wants to put a picture on their wall by an artist of the moment isn’t getting some kind of satisfaction out of it too.’

In their book the Wagners state that as early as 1625 collectors have been making money by trading art. ‘Art is an investment,’ says Thea. ‘So although this isn’t as interesting to Ethan and I, we accept that it is a valid reason to collect.’ Though the pair do admit that ‘flipping’, the term for describing someone who buys a work and then sells it on again for a profit very shortly after, has very negative connotations.

‘Everyone in the art world takes a very negative view,’ [of flipping] says Thea. ‘It really indicates lack of seriousness about collecting.’

Does art collecting have to be serious?

The Wagners think that seriousness is essential, but also acknowledge that not everyone starts off that way. ‘Perhaps you started off just wanting to match a painting to your couch,’ says Thea, ‘but art is addictive and it’s probably going to open a lot of doors and lead you to some interesting places.’

‘For art to be at its most rewarding level,’ says Ethan, ‘where the work of art can touch your emotions and stimulate feelings about social, political or human issues it does need to be dealt with seriously. Whether you get your information from a monograph, from the dealer or from the artist themselves, seriousness is vital.’

Bowie was not only serious about collecting but also took influence from them in his own work. Like many collectors, he found that being part of the art scene was almost as rewarding as the art ownership itself.

‘For Bowie collecting was very much about knowledge and intellectual curiosity,’ says Sayles. ‘He had a really serious engagement with the art world; he wrote for and was on the board of Modern Painters, the really highbrow art magazine at the time, he interviewed people like Tracey Emin and Damien Hirst, and he really had a very intellectual involvement with the art world and I think his collection very much represents that.’

How should you buy art?

Though it’s widely acknowledged that buying art for love and to increase knowledge is preferable to buying simply to put wealth on your walls, both the Wagners and Sayles acknowledge that the words ‘art’ and ‘market’ go hand in hand. So long as money is going to the artist or gallery then ultimately that world is profiting.

How you collect is deeply dependent on you as a person and on what your needs and wants are at the time. Whether your art collection is based on matching your interior décor, on the love of a particular artist’s work, or as an investment there is no real right way to do it. Just make sure you’re doing it for you.

How do you collect art? Share your stories in the comments below

We are passionate about art; we collect, promote and insure it. Find out more about our stand alone Art Insurance policies, or get cover with a comprehensive Building and Contents Insurance package.