Interior designer, Nina Campbell, and her Object of Desire 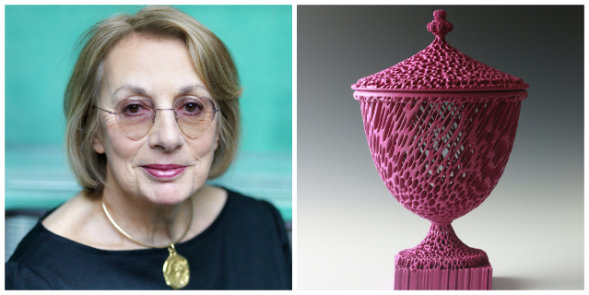 One of Nina Campbell’s first jobs was to furnish the renowned Annabel’s nightclub in Mayfair, London. Having trained with the doyen of English decorating, John Fowler, in the 1960s, she started her own business in her twenties. Since then, she’s gone on to work for Ringo Starr, Rod Stewart and the Duchess of York.

Nina’s relaxed English style is loved by an international clientele from New York to Nanjing. In 1978, she launched a fabric collection with Osborne and Little, which she refreshes yearly. She has a shop in London selling furniture and accessories and will open another in Chelsea Harbour, London, in mid-April.

Nina’s Object of Desire is an urn by potter Michael Eden. Although it has a traditional shape, it’s made using 21st century computer technology.

“I first saw his work an art fair on the stand of ceramic dealer Adrian Sassoon, who has perfect taste in both the old and the new,and I just had to ask if I could touch it. I always feel if I am not compelled to touch an object, it’s not worth buying. I had no idea what the Eden pot was made from and was surprised when it was so light. I was subconsciously expecting the density of ceramic, but I was told it was made from nylon.”

Michael Eden was originally a potter working in clay and loves 18th century decoration and period shapes. His acknowledgement of his inspiration is in the names he gives his pieces, including his tureens (serving dishes for those not in the know) “Imari” and “Wedgewoodn’t” – Nina’s favourites.

Michael uses additive manufacturing, more commonly known as 3D printing, to create his pieces. He scales and simplifies a section of the surface pattern from an 1840 Davenport cup and saucer and then converts it from 2D to 3D using CAD software, hooking up to the printer to construct his tureens. He also creates variations by scaling and twisting the design. The 3D printer then slowly builds the pieces from very fine layers of powdered nylon, joining one to the other by laser. The whole creation is then hand finished.

In Nina’s home, Eden’s fine tureens sit amongst a diverse array of things she has collected over the years. Modern and traditional ceramics and monkeys in all manner of materials. She collects anything to do with monkeys. “One of the most important considerations when creating a home is to add character by adding quirky pieces that mean something to their owner”, she says. “The things don’t have to coordinate, but they shouldn’t clash. It’s all about an interesting blend.”

To combat the idea that too many objects around the place can give an atmosphere of clutter, she suggests rearranging every six months or so. “Don’t display all your things at once, vary what’s on view by having a summer and a winter show.”

Find out more about Nina Campbell on her website ninacampbellinteriors.com

If you want to keep safe your treasured possessions and protect your ‘Objects of Desire’, find out about our unlimited home insurance cover.