Five of the best chronographs

With a chronograph worn by Hollywood legend Paul Newman selling for $17.8 million, Tim Barber finds out why a wristwatch with an in-built stopwatch carries so many evocative associations

The original Cosmograph Daytona as worn by Paul Newman

Summoning stories of adventure and derring-do, the chronograph served as a timing tool for soldiers and a navigational aid for airmen from the First World War onwards. It’s also the watch that went to the moon, in the form of Omega’s Speedmaster, wrapped around Buzz Aldrin’s wrist as he stepped onto the lunar surface for the first time.

The chronograph’s most fundamental association is with motor racing, thanks to the historic activities of brands like TAG Heuer and Rolex. The latter’s Cosmograph Daytona – named after the Daytona International Speedway – is also the most expensive watch ever sold. Last October, the Daytona worn by the movie star (and racing driver) Paul Newman sold at Phillips auction house in New York for an astonishing $17.8 (£12.7) million.

For a mainstream watch, this is one of the most complex to make – and one of the most fun to own – thanks to its obscure but charismatic combinations of sub-dials, buttons and read-outs. Who cares if you’d never use it to time anything at all? The fact is, any serious watch collection should have a chronograph or two, and there are plenty of collectors who specialise only in chronographs. Here’s our pick of the best.

Launched in 1963 and taking its name from the famous racetrack in Daytona, Florida, the Cosmograph Daytona is the most desired chronograph in the world. Not least because Rolex makes so few of them – waiting lists for a steel entry-level model can run to years.

The Daytona’s mystique has climbed considerably in the past 10 years. This is particularly due to the surging popularity in the collector market of the distinctive exotic dial versions that came to be known as Paul Newman Daytonas, after the watch the actor wore.

Discontinued in the late 1970s due to their unpopularity, they can now fetch hundreds of thousands of pounds; an auction scheduled by Phillips for May in Geneva, in which every lot is a vintage Daytona, will reveal to what extent the auction of the Paul Newman has impacted the market even further.

For now, the current steel Cosmograph Daytona is one of the best versions of the modern era, available with a white or black dial and scratch-proof ceramic bezel. The screw-down pushers, which aid waterproofing, are another hallmark of the Daytona. Just expect to wait if you want one.

If Rolex’s Daytona is the most desired, Omega’s Speedmaster is the most legendary, as the watch that went to the moon. First introduced in 1957, it was selected by NASA as the official watch to be worn by its astronauts, and came into its own on the fateful Apollo 13 mission, when astronaut Jim Lovell and his crew used the watch to time engine bursts as they attempted to navigate their damaged spacecraft back to Earth.

Unlike Rolex, Omega has proliferated the Speedmaster, with hundreds of references over the years. Now you can get full ceramic versions, moonphase models, automotive-inspired versions and more. This one is something of a purists’ favourite: hand-wound, relatively small at 39.7mm, and with a terrific retro livery of blue on white; it harks back to the pre-NASA era of the Speedmaster’s development.

In 1969, the historic watchmaker Zenith launched the world’s first automatic chronograph movement, which it rather wonderfully named the El Primero – a frequency wonder that has become a legend in its own right. Besides Zenith’s watches, a version of the mechanism would eventually end up powering Rolex’s Daytonas in the 1990s, and it forms the backbone of Zenith’s watchmaking to this day.

The Defy, however, takes things into more extreme territory. The basic El Primero is famous for the high frequency of its internal oscillations – 36,000 vibrations per hour (VpH) – making it all the more accurate as a timing device (the actual purpose of a chronograph, let’s not forget).

The Defy raises the bar to 360,000 VpH, meaning it can deliver timing down to 1/100th of a second – when the stop watch is switched on, the sweep seconds hand laps the dial once a second.

If the modern look and high tech of the Defy is not for you, Zenith has also recently been rolling out handsome vintage-style watches inspired by the military pilots’ watches it made in the 1960s.

Another vintage-style alternative is the limited edition Autavia from TAG Heuer. The original Autavia appeared in 1962 (when TAG Heuer was still just ‘Heuer’), and was one of the most high-tech and handsome chronographs for professional motor racing drivers on the market. Five years ago it was all but forgotten, but secondary interest began surging back and prices started to rocket – models can go for several tens of thousands of pounds now. 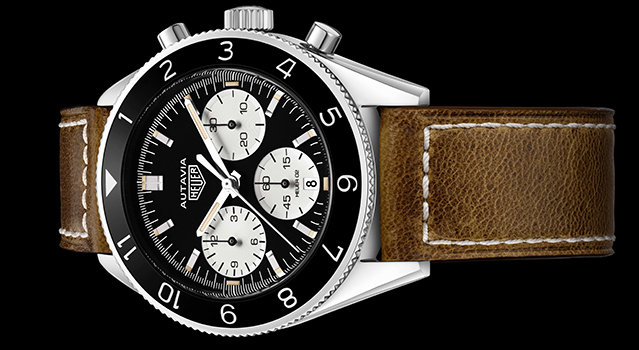 TAG Heuer sensibly picked up on this Autavia fervour. While on the one hand it’s been storming off into the future with its Connected watch and showy modern chronographs, TAG has been careful to nurture the links to its history, and last year the Autavia returned, in a tough modern model that nevertheless recalls the classic models of yesteryear.

Among all these historic names in chronograph making, you wouldn’t expect to find a German pen-maker would you? Wrong. Montblanc’s watchmaking division has been blossoming into one of the most adept and impressive operations in Switzerland, and crucial to that has been its acquisition in 2006 via its parent company of Minerva, a historic specialist in chronograph watches whose history went back to the 19th century.

With the 1858 Chrono Tachymeter, Montblanc’s watchmaking division is booming

Of late Montblanc has been digging into that history and creating quite gorgeous watches using movements based on technical designs from decades ago, with looks to match. Unlike the watches above, the 1858 Tachymeter chrono is a ‘monopusher’ – it has one button to start, stop and reset the stopwatch function that sticks out of the crown, rather than two.

It’s an altogether more old-fashioned style of chronograph, with a quite glorious manual-wind movement that’s entirely hand-finished. The case features a more modern development in watchmaking: the use of bronze. But with its tendency to patina over time, it will only add to the antique feel.

We offer tailored high-value watch cover as part of your Hiscox home and contents insurance.