As the 2018 Summer Exhibition opens its doors, we find out why Grayson Perry’s playful approach to art makes him the perfect choice to oversee proceedings, and how he found his way into the Hiscox Collection

This year marks the 250th anniversary of the Royal Academy of Arts Summer Exhibition, the longest-running and largest open-submission art exhibition in the world. In previous years, Eileen Cooper, Yinka Shonibare and Michael Craig-Martin have taken up the mantle of coordinator. In 2018 it is the creator of ‘The Most Popular Art Exhibition Ever’, Grayson Perry, who holds the reins.

Art is a democracy

Never one to shy away from a challenge, Perry has adopted a theme of ‘art made now’ for the 2018 Summer Exhibition – a celebration of ‘the democracy of the exhibition and the diversity of art being made at this moment’.

Established names such as Mike Nelson, David Hockney and Tracey Emin feature this year – you’re welcomed by one of Anish Kapoor’s monumental sculptures hovering in the courtyard, while an enormous textile entitled Royal Valkyrie by Joana Vasconcelo demands your attention up in one of the galleries. However, these works sit next to works by artists that most people will never heard of. The intention is to broaden the visitor’s understanding and ultimately appreciation of contemporary art

The breathtaking variety of art on show is down to the simplicity of the submission process. Email a digital image of your art to the RA, pay a £25 fee and that’s it, you’re done. If the work is accepted, it’ll be put up for sale in the exhibition, with proceeds split between the artist and the RA, which takes 30%.

As expected, prices also vary – a lot. The lowest asking price at this year’s exhibition? £50. The highest price? Banksy’s EU referendum piece Vote to Love is apparently priced at £350 million – a nod to the claims made about what leaving would save the UK every week.

This year has seen the RA committee review more than 20,000 submissions from experts and amateurs alike: paintings, print-makings, photographs, sculptures, films and architectural plans. But of those 20,000 works of art, only 1,351 have taken pride of place in Burlington House. Reviewing the art can take several months – and then there’s the small matter of where it’s all going to go.

A documenter of British life

Perry has undoubtedly brought a playful touch to the Summer Exhibition this year. Working in everything from tapestry and graphic novels to embroidery, print-making, ceramics, drawing, writing, film and performance, Perry’s alter-ego Claire appears in a number of guises, from Little Bo Peep to a powerful high priestess in ceremonial cape to, more recently, clown outfits. 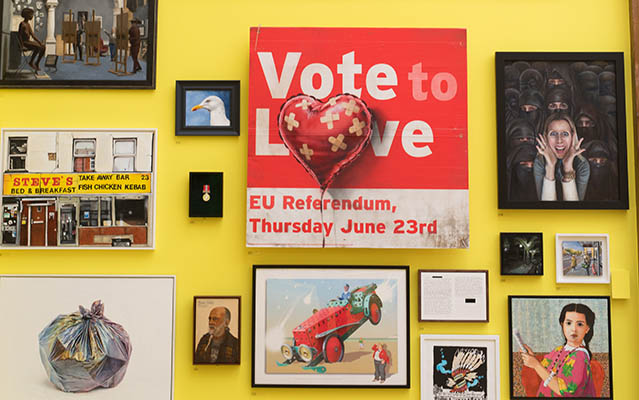 One of Perry’s most famous works of art, Death of a Working Hero – a tapestry inspired by the ceremony of the blessing of the banners in Durham Cathedral – was recently purchased by the Hiscox Collection, a huge global gallery of contemporary art on display across the company’s offices in the UK, US and Europe. Death of a Working Hero joins another piece by Perry in the collection, Print for a Politician – a vast 7ft by 2ft etching of social strata in Britain.

So, what attracted Hiscox to Perry’s work in the first place? ‘It’s unique. When we first saw his tapestry, we were immediately impressed by it; the scale, the format, the colours, the skill. He has an ability to document British life in a way that not many artists are doing – with humour, yes, but also with sensitivity,’ says Whitney Hintz, Curator of the Hiscox Collection.

One for the collection

Hiscox started acquiring works of art in the early 1970s, when, after gazing at the bare walls of the office, former chairman Robert Hiscox decided the company could use a splash of colour. Thinking it would be a good way to motivate his staff, he recruited the help of his close friend and art advisor Ivor Braka, who set off in search of contemporary art.

‘The focus was mainly on modern British art: Hapworth, Kossoff, Bacon,’ Hintz says. ‘In the years following, we became regarded as art collectors – we were very unlike our competitors in that regard.’

However, in 1998 an auction was held and ‘pretty much all of our stock went up for sale. About 30 works were sold – key works, valuable works: an early Damien Hirst painting, an Auerbach… The Kossoff, the Bacon… They all went. It was a turning point for the collection,’ says Hintz.

It was the end of an era but also the beginning of another. Instead of investing in big names, Hiscox chose to support up-and-coming artists. Little by little, the collection grew, and before they knew it, they had one of the most impressive corporate collections in the world.

‘Today, there are approximately 1,000 pieces in the collection,’ says Hintz, adding that although the size of the Collection has increased 20-fold since the 1970s, like the Summer Exhibition, Hiscox hasn’t lost sight of its original goal. ‘Even after all these years, the objective is still the same: to inspire.’

If you feel inspired by the Hiscox Collection, then the Summer Exhibition is a great place to start. Its new ‘Room of Fun’ is dedicated to especially entertaining pieces by the likes of David Shrigley and is just one of several new galleries made possible by the RA’s £56 million makeover.

The project, designed by David Chipperfield, has taken three years to complete and includes six new galleries, two new studios and a new bridge connecting Burlington House to 6 Burlington Gardens – both of which are part of the RA’s two-acre campus. The scale of the redevelopment is truly astonishing, so do yourself a favour and check it out.

Our Hiscox Home Insurance includes £10,000 cover for your art or we can arrange extra cover for higher value collections