How do cities inspire art?

From Mondrian’s abstracted New York grid to the impressionist Parisian boulevards of Pissarro, we examine the ongoing relationship between art and urban environments.

With the Evening Standard Contemporary Art Prize in association with Hiscox urging artists to turn to London for inspiration, we look at the different ways in which some of the greatest painters of the 19th and 20th centuries have considered, reflected and depicted the urban landscape on canvas.

For British painter Laurence Stephen Lowry (1887-1976), depicting Britain’s gritty, grinding and monotonous industrial life was his answer to commenting on the urban landscape of his day. Today, his Industrial Landscape works serve as exemplary modes of representation of working class life in Northern England from the late 1920s through to the ’50s.

Lowry famously stated: ‘My ambition was to put the industrial scene on the map because nobody had done it seriously.’ His canvases were fiercely committed to the theme of life on the streets, getting to the factories in and among belching grey clouds of smoke and smog.

Lowry’s chimney tops, factory roofs, brick buildings and landscapes devoid of trees and hopeful blue skies, possess a machine-like quality, instilling a sense of the monotony of the 9am to 5pm routine and the relentless nature of factory life. Striking and imposing, the linear buildings are doused with melancholic tones and hues as little matchstick figures shrink into the picture. 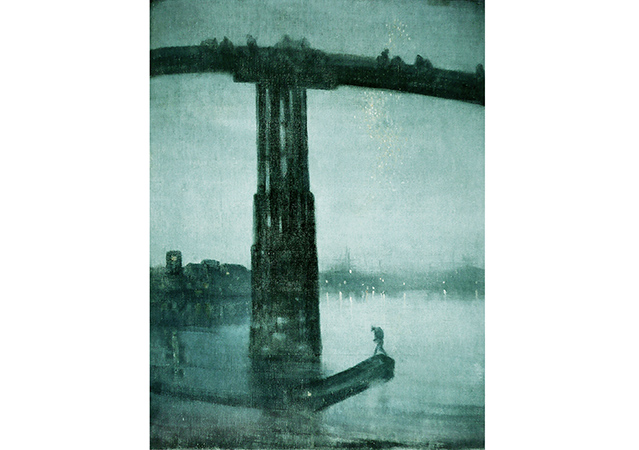 On the other hand, James Abbott McNeill Whistler (1834-1903) offers a stark contrast to the dark urban life conveyed by Lowry. An American painter who spent most of his life living in London, Whistler provides a subtle insight into life along the Thames in the latter half of the 19th century, with works steeped in beauty and a sense of tranquility.

Drawing on Asian influences, Whistler’s Nocturne: Blue and Gold – Old Battersea Bridge, c.1872-1875, captivates the viewer with its flat painterly surface and muted scene in which the Thames twinkles. Bathed in moonlight and smothered in smog, faint lights from the construction of the Albert Bridge and Battersea Power Station reveal a different slant on the industrialising city.

But not all captivating and illuminating depictions of urban life highlight lowly lit city streets, industrial zones or tempestuous skies. Others artists, such as the esteemed Édouard Manet (1832-1883), chose to reveal the conditions of urban life through intimate interiors, inviting the viewer into local haunts.

Manet’s A Bar at the Folies-Bergère, 1882, offers a fine example, as we are ushered inside a famous cafe-cabaret bar in Paris. With weighty chandeliers, gleaming bottles and dapper top hats peppering the scene, Manet evokes a sense of how the other half live as we glimpse a venue frequented by the wealthy middle class.

At the centre of the composition, the barmaid’s facial expression suggests that working life isn’t quite as much fun as the crowded scene we see in the mirror behind her. Manet leaves us unsure and questioning what really goes on in these bustling Parisian bars.

Manet’s A Bar at the Folies-Bergère evokes a sense of how the other half live. Photo: Alamy

Depictions of well-known monuments from a city can also express the energy of urban life. Eiffel Tower, dated 1910, by Robert Delaunay (1885-1941) does just that. Delaunay takes the famed tower and fragments its form and renders it with glorious burnt orange tones and delicate brushwork, giving life to the inanimate structure.

The bellowing buildings that surround the tower almost bow outward, as if they are being held back from encroaching on the revered monument. The fragments are painted in such a striking way that we can still decipher and recognise the aspirational French symbol, but feel the persistence of something slightly unstable and jarring ­­– the threat, perhaps, of modern-day life.

Others employ a more conceptual and abstract form of painting to relay the beat of a city’s urban pulse. Take Dutch painter Piet Mondrian (1872-1944) and his painting Broadway Boogie Woogie, 1942-43, for instance.

Mondrian began his career as a realistic landscape painter and, over time, emerged as a phenomenal painter of abstraction. Broadway Boogie Woogie embodies the dynamic spirit of New York City, which opened its arms as a haven to Mondrian after the outbreak of World War Two. The composition is constructed with grid-like form, echoing the urban mapping of the city, and is painted in simple primary colours.

Inspired by American jazz and the improvisation of boogie woogie, Mondrian reduces the form of the city to geometric shapes, rendering a pulsating, rhythmic grid for our eyes to follow up and down the canvas, setting us off on our own improvised path across the city. 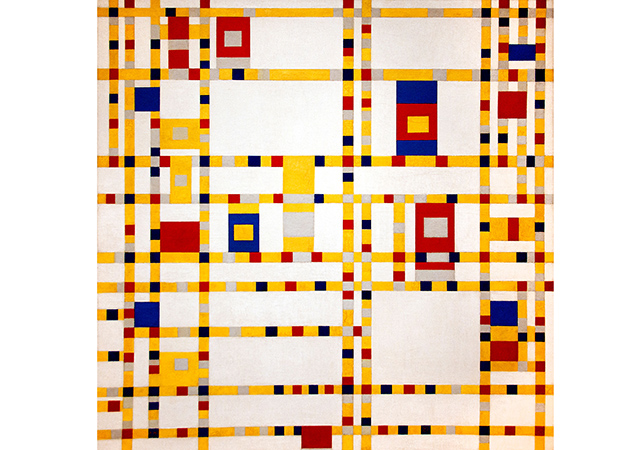 Perhaps the spectacle of modern life is best interpreted by the great impressionist Camille Pissarro (1830-1903). Pissarro’s The Boulevard Montmartre on a Winter Morning, 1897, is a superb example of an artist who sat studying the lively urban life of Paris as it played out before him on the then newly designed city streets created by Baron Haussmann in the 1860s.

Pissarro’s series of 14 paintings depicting the grands boulevards places the utmost importance on depicting the urban revival of Paris and the animated life it encouraged. The lamppost in the foreground of The Boulevard Montmartre on a Winter Morning functions as a repoussoir, guiding our eyes along the boulevard and into the depths of the picture with the momentum and pace of one of the many passersby.

This painting has a dynamic energy with an abundance of people walking, talking, perusing and travelling by horse and car – all actively occupying the city streets. Rendered with short, precise, yet soft, brush strokes, Pissarro builds momentum and creates a sense of anticipation, transforming the mundane into a fascinating spectacle.