4 ways to expand your city home

When you’re living in a built-up area, creating an extra room for visitors or your growing family can be a challenge. Dominic Lutyens finds some innovative solutions to making the most out of your space.

Living in a busy urban metropolis may afford you easy access to your workplace, with a range of restaurants, bars and shops on your doorstep, but it can come at a price should you wish to extend your property.

While country-dwellers can add a wing to their house, get planning permission to extend into the roof and dig down to create a basement, urbanites are less likely to be afforded such flexibility. However, with a bit of imagination and lateral thinking, it’s possible to find other effective ways to expand a home in which space is at a premium.

Assuming that an extension is the best way to enlarge a house can be a mental block to exploring other solutions. One of the most effective of these is to reconfigure the layout of a home to ensure the space within is maximised.

‘People always think the best way to increase space is to add an extension,’ says Simon Haycock, a partner at London-based practice Michaelis Boyd. ‘However, before going down that route, I’d recommend taking a fresh look at the space currently available in your home. More often than not, it’s not being used as efficiently as it can be.’

Haycock says that in many cases there are a lot of dead spaces in a home. ‘As a first step, I’d recommend a general internal reconfiguration of spaces to make them flow better and bring in more light.’

Haycock strongly recommends creating a double-height space — without having to make major structural alterations — to add a sense of volume. ‘One thing that works well is to cut out a section of the ceiling in a hallway to reveal part of the floor above, which could be a corridor or study,’ he says. ‘From this new mezzanine level on the upper floor, you get a view down. These extra perspectives in a home enhance the feeling of space.’

Architect Scott Kyson agrees that the first sensible step towards maximising space is to review a home’s existing layout and consider making internal structural changes. In his view, haphazardly designed corridors and service areas such as utility rooms and washrooms are the biggest culprits in terms of wasting space.

‘Reconfiguring these will often yield more space. Redesigning a corridor to make it narrower will make adjoining living areas bigger,’ says Kyson, suggesting the introduction of a fire-suppression system as another means of creating more space.

‘In smaller properties, such as apartments, where maximising space can be a bigger issue, installing a fire-suppression system allows you to dispense with a conventional layout of hallways, corridors and doors, which traditionally provide a fire-protected escape route.’

The space these areas once occupied can be integrated into living rooms to make them larger and create a more flexible layout, like those found in open-plan loft spaces. Kyson adds, ‘But when dealing with fire safety, it’s vital to comply with the highest safety guidelines. Your local fire brigade, along with the council’s building inspector, should check all elements of the new layout.’

Ed Burgess of Burgess Architects points out that there’s no reason to stick with straight walls, since subtly reconfiguring them can allow for a more flexible layout. Replacing straight walls with walls with a slight kink can free up more space where it’s needed.

Burgess has done this at Book House, a 1930s family home where he has shifted the back part of a straight wall dividing a bathroom in order to enlarge the space for a toilet and vanity unit, while leaving a small adjacent area for a shower cubicle. A bath occupies the space on the other side of the wall.

Meanwhile, Haycock recommends incorporating glass and other translucent materials wherever possible. ‘Introducing glazed external doors, windows and skylights increases natural light that flows into a space and connects indoors and out. This inevitably increases the sense of space. Semi-transparent screens between areas in a home will also make a space feel bigger while still providing some privacy.’

A skylight can also provide valuable extra head height since its upper pane of glass stands flush with the top of the tiles on a roof, rather than the ceiling of a room. 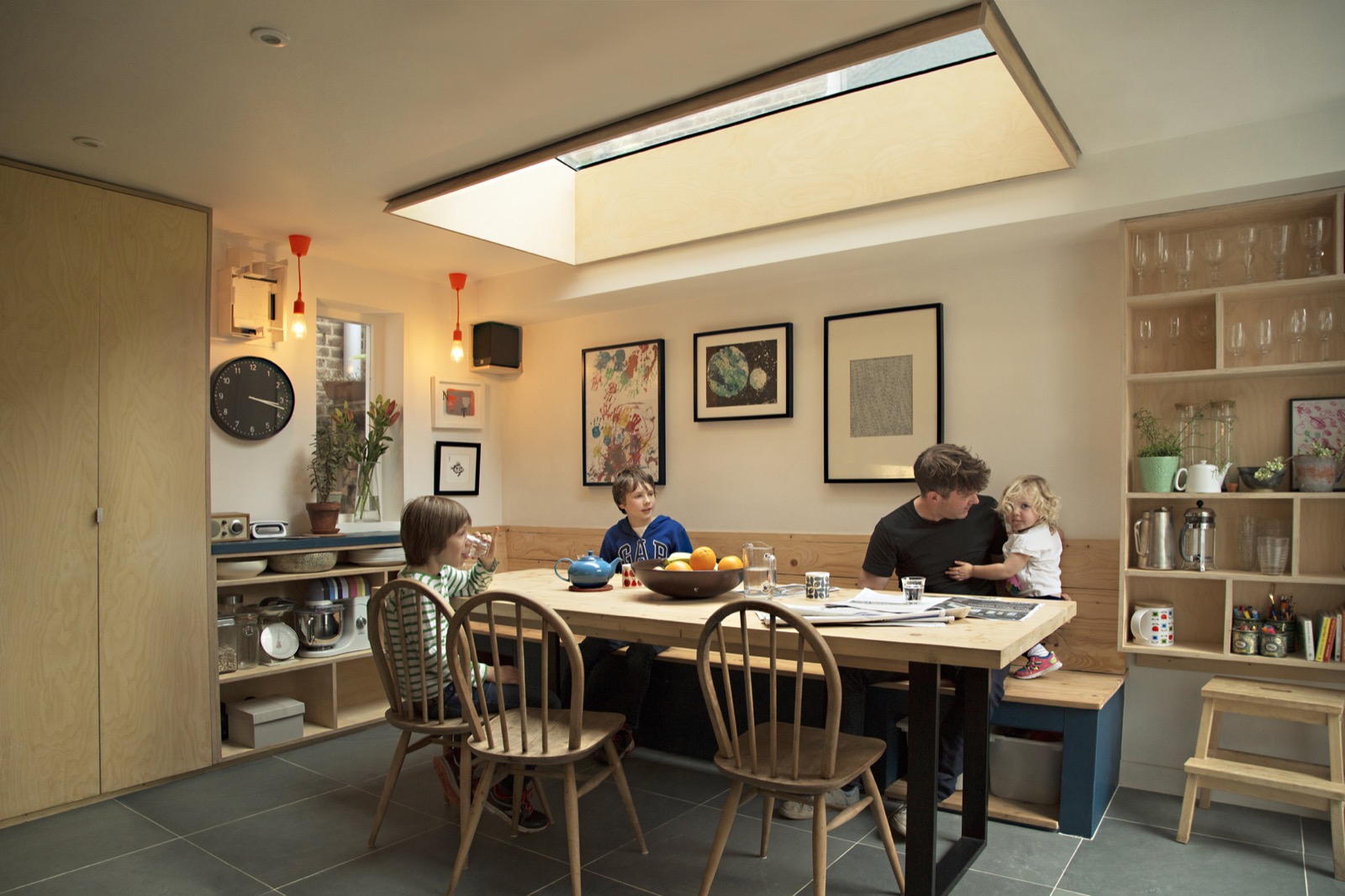 ‘For one of our projects, Crane House, we created bespoke, built-in benches that double as storage. I’ve also created under-stair storage in the form of chests of drawers that open out into a room. Drawers make it much easier to access objects at the back of a recess under stairs. If you’ve got a neat and tidy streak and own beautiful crockery and glasses, display them on open shelves in the kitchen, as these make a room feel bigger than cupboards.’

On the subject of kitchens, Burgess recommends saving space here by moving the washing machine closer to an upstairs bedroom. ‘It’s a logical place to keep it, because that’s where worn clothes come from and clean clothes are stored.’

He also has a tip for bathrooms: ‘Why not install a Japanese-style sitting bath that takes up less space and works well for showers, yet allows you to immerse yourself for that long, relaxing weekend soak?’

Ultimately, as with any home modification you’re considering, it’s important to check that the design of your home tallies with your lifestyle. If a particular room isn’t used that often and is taking up valuable space, it’s time to think of how it could be used. ‘Start by thinking about what really matters to you in your home,’ says Burgess. ‘If, for example, you don’t cook much, a small functional galley kitchen will suit you best.’

Best Laid Plans is a 10-part series co-created with Hiscox airing on Channel 4 every Saturday at 4.30pm.